My Ormsby ancestry in America dates to the late 1630’s when Richard Ormsby came from England and settled in Maine. The family name was often times spelled Ormsbee. Richard made his way to Massachusetts.

His descendant, Isaac, was born in Rhode Island. He served in the Revolutionary War and was with General George Washington at the defeat of General Cornwallis at Yorktown. In 1796, he walked to Greenfield, NY to purchase land. After the purchase, he walked back to Barrington, RI, then returned, on foot, to Greenfield with his wife, Patience (Chase), and their four children. He and Patience are buried in the Ormsbee family burying ground on the site of the Ormsbee farm near Porters Corners near Greenfield.

One of their children was Russell Ormsbee. He was instrumental in documenting his family’s history. Early in life, he developed the habit of making family records and preserving them. He inspired his descendants to do the same. He was also quite a traveler for those days. His diary mentions trips to Vermont, Rhode Island, New York City, Boston and Michigan.

Another of Isaac and Patience’s children was Nancy. She married my third great grandfather John Earl Harris. They settled in Greenfield after their 1820 marriage, before leaving for Indiana in 1837. Later, they moved to Cato, Manitowoc Co., WI. Both Nancy and John Earl are buried in Cato Heights Cemetery in Cato.

One thought on “Surname Saturday | ORMSBY/ORMSBEE” 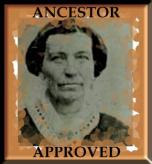